Music Snobbery ...and some links

It was a busy week of getting technology hooked up and doing shows and writing things.

Let's begin with a lovely voice singing a lovely (wistful) song. If you're watching the "High Fidelity" reboot (or if you remember the famous "Garden State" soundtrack), you've gotten little tastes of Nick Drake. I actually think HF goofs by using "Pink Moon." Real music snobs would be bugged by its use in a 1999 VW commercial. (It has also been argued that the commercial relaunched the music of Nick Drake, who died young.)

Anyway,I recommend listening to a lot of his stuff, but I also really love this treatment by jazz singer Lizz Wright. More people should know her and Drake.

Here is this week's column, which offers up a name for this period of timeless confinement. And these are some shows we did this week, after we fled from the building, in reverse order. This was the HiFi episode of the Nose, but we talked about a lot of other things.  We talked about life! And here's a show about the state of sports and Scrabble.  We had some tech and guest problems, so that's why you hear me vamping sometimes. And if, unlike Ben Carson, you can't go to sleep standing up, you might want to listen to our show about sleep.

We have new heroes.  Like Max Brooks (and his now famous Dad video).

But I also loved Max's interview last week on Marketplace. Especially when he explains why "it's us."

You get different culture heroes at a time like this.

I remember, in the days after 9/11, there were people like Don DeLillo who had just schemed the whole thing over and over in his novels for decades. He was, back then, the equivalent of someone right now like Emily St. John Mandel or the makers of "Contagion" – almost too prescient and right. Lawrence Wright keeps being that guy.

In 2001, after a certain segment of music fans had kind of turned against U2, it turned out they had released “All That You Can’t Leave Behind” with songs like “Grace” and it was as if they had made this “break shrink-wrap in case of emergency” CD, and suddenly they weren’t annoying anymore.

OK. Here is a brilliant thing.

I heard it on the radio last evening in the car on the way back from a woods walk with Declan the Dog. The outdoor walk is essentially the only diversion I'm allowing myself these days.

Do listen. It's a great song and the singer, Gaby Moreno, does a remarkable job of reproducing some of Dolly's timbre and vibrato. And you've just got to give it to Chris Thile, right?  The dude's relationship to music is a thing to behold. I've got a Live From Here baseball cap which I started out wearing ironically because I think the title is so terrible. But I'm starting to wear it with pride.

Reader Betsy Keller suggests publishing amusing emails about COVID-19 cancellations. I got one informing me of this cancellation. I wasn't planning on going, We did a show on polyamory a few years back, and now I'm on some email list. Note that the event would have included a "Polyamory Dance Reception." Swing your partner!

Reader Paul Frisman suggested that our three-person radio "skeleton crew," should be called the "Bleach Boys" which I love but Monday's crew will be me, Betsy Kaplan and Cat Pastor. Ladypersons predominate. Kerry McCarthy suggests "True Blue Triad," which I like because it's a chord. Right now I'm leaning toward Nancy O'Connell's "Highly Focused Optimally Sized Work Force." HFOSWF.

On that drive home yesterday, I got a little nostalgic for, you know, the old life. Where I would go pretty much where I wanted. Those were the days.

The Semblance of a Plan

My place of work, Connecticut Public Everything (try our bagels!), has been smart and proactive about getting ready for the paradoxical job of doing journalism while following health protocols.  It's like safe sex, although not as much fun. Accordingly, I will eventually be able to broadcast from The Domicile, and it will sound like I am in the studio. But not quite yet.

So starting Monday, what the company insists on calling "a skeleton crew" (three of us) will come to the studio, do the show, wipe down surfaces, and leave. Let's all work on thinking up a term more delightful than "skeleton crew." Send your entries to colin@ctpublic.org.

We'll do our usual shows at 1 p.m., rebroadcast at 9 p.m. We'll try to keep you informed about the pandemic and also to distract you with other subjects.

For example -- you can't win unless you play -- Mexico's president is raffling off its version of Air Force One.

Think of the insurance!

My other plan is to not get sick. I'm 65 and in reasonably good heath. This is the first year they give you a pneumonia shot, a blessing which I now count. Thanks to Declan the Dog I walk a lot.  My FitBit shows 6 miles of steps most days. I don't sleep enough. I need to lose a few pounds.  I can't tell whether I'm an ubermensch or a sitting duck.

Last thing. Seeking a jolly image to replace "skeleton crew," I googled "Hummel figurine" and this came up first. 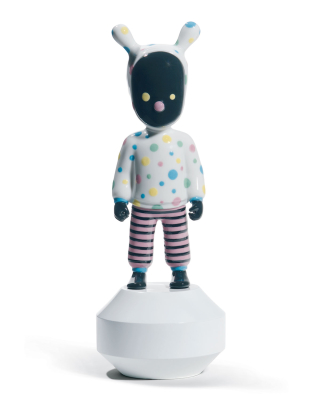 That can't be good.